Don’s father gave him a Jetex 200 solid fuel jet engine at 9 years of age. It powered some of his model aeroplanes and boats which were also designed and built by Don.

At 14, he acquired a 1/10th scale model of the German V1 pulse jet. This would prove to be too fast for his models so he attached it to his bicycle to quicken his ride to school. Keeping it from melting due to the low velocity of the bicycle and rider was an issue. 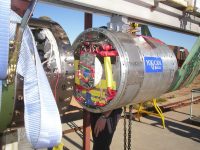 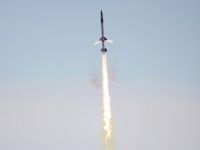 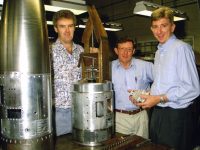 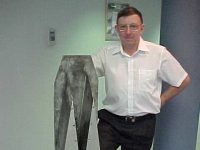 It would be many years on before Don’s spirit of adventure for jet propulsion would be rekindled.

At 18, he designed and built a gas turbine utilising an exhaust driven turbo charger from a World War II aircraft engine obtain from a war disposals shop.

A single combustion chamber (spark ignited) was designed and built to convert the charger to a jet engine. The project came to a grinding halt when his father found him fitting the engine to the back of his Morris Cowley utility.

Prof. Keith Bullock solicited Don’s support to build a very high temperature steam engine, made from ceramics, so enabling a higher efficiency to be achieved. It was Prof. Bullock who introduced him to Prof. Ray Stalker (ex-Australian National University Hypersonics Division) and on his way to explore Scramjet propulsion utilising a shock tunnel which was designed and developed by him.

Don and Ray set out to build an 800 mm long model of a proposed Scramjet engine for testing in the T4 UQ Hypersonic Tunnel (also designed by Ray Stalker).

The model Scramjet achieved combustion for a fraction of a second. The model was returned to Don and was a centre stage exhibit in the NQEA office foyer alongside a full size Scramjet propelled space craft, designed by Ray Stalker, and built by NQEA under Don’s supervision.

Involvement continued with UQ (University of Queensland). Don was now working more with Prof. Allan Paull who was in charge of Hypersonics with DSTO (Defence Science & Technology Organisation).

Don spent many days at Woomera observing the launching of two stage rockets with Scramjet payload.

Don acquired the T3 Hypersonic Tunnel designed by Ray Stalker from the ANU when they closed their Hypersonics division. He has since donated much of this to the UQ Centre for Hypersonics under the guidance of Prof. Michael Smart and Prof. Richard Morgan.

He recently made available the main high pressure drive tube (weighing 15 tonne) to Oxford University and visits the Oxford facility from time to time.

His ambition now is to convince the DSTO or other related parties to take up his design for a land based horizontal low internal pressure tunnel to approx. 1000 ft. altitude. The proposed tunnel will be about 2.5 km with a further 1.5 km deceleration section. Test Scramjets will be propelled by rocket or linear motor to speeds of Mach 8. This arrangement allows for daily testing of Scramjets as opposed to 2 or 3 per annum using the space launch process.