Hovercraft have long held a fascination for Don Fry.  In the early 1960’s he designed and built his own 6 metre x 2.5 metre hovercraft from 3mm lightweight marine plywood.  It was powered by a 250 HP radial piston, air cooled petrol engine driving a central backward curved radial lift fan and propulsion system.  The craft incorporated a high pressure air curtain rather than the conventional rubber skirt.

NQEA built six AP1-88 hovercraft (100 passenger) under the terms of a licensing agreement negotiated with British Hovercraft Corporation.  Two of the units have since been retro-fitted as passenger/cargo carriers and one has a magnetic head docking boom installed which enables passenger access to Chevron oil rigs off the coast of Angola.  The conversion and docking boom were designed by Don Fry. 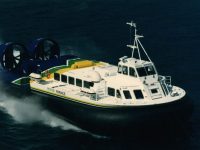 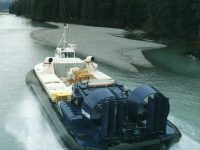 Hoverfreighter operating on a Canadian River 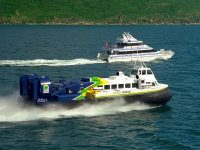 Hovercraft and Taupo Cat at sea 1987